At minus-40 degrees Celsius, the weather was unbearably harsh at the summit of North America’s highest peak, Mt McKinley. Saachi Soni was carrying 30 kg on her back, and an equal amount on her sled. Her team of mountaineers had made a successful summit, and they were on the way back down.

“Suddenly, I plummeted inside a crevasse. It was blue and deep. When I looked down, it was completely dark… as if there might be a tunnel like that in the movie Void,” recalls the 24-year-old. All that kept her from certain death was a length of rope. “Luckily, I just hung along the crevasse because of the weight in my sled.”

Saachi is no stranger to such death-defying adventures. 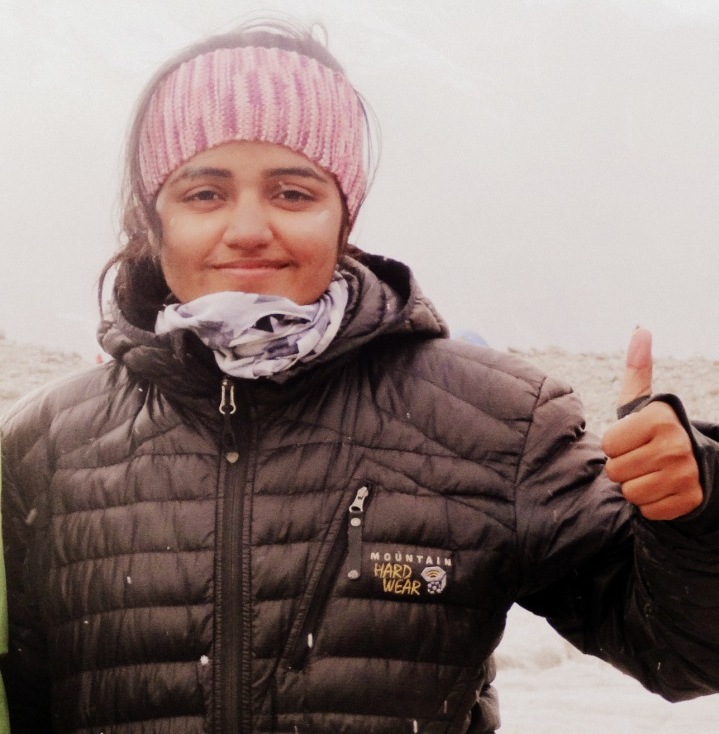 Born in Jaipur, Rajasthan, she was initiated into mountaineering by her father at the tender age of seven, and spent her childhood, trekking, climbing and summiting peaks all over the world. An award-winning student of mass communication at Delhi University’s Indraprastha College for Women, she happens to be the youngest Indian to scale Australia’s 10 highest (75km hike) peaks in just 50 hours to get her name registered in the Limca Book of Records. She is also the youngest Indian to scale the intimidating Mt. Elbrus (Europe’s highest peak).

In between, she has climbed the Mt. Everest, Mt. McKinley and peaks in the Himalayas – Garhwal, Sikkim, Spiti, Himachal, among many others.

In June this year, she was a part of the medical expedition to Mt. Satopanth, the second highest summit in the Gangotri Group, located in the remote Garhwal Himalaya range. The expedition was special because the team of 25 mountaineers led by Dr Anil Gurtoo of the Indian Mountaineering Foundation (IMF) brought along 150 kg of garbage collected from Gangotri to the plains.

“It is an incredibly beautiful and remote area with unlimited and untapped mountaineering. But being part of the cleanliness drive gave me an opportunity to contribute to the ongoing Swachch Bharat Mission in my way, and that’s quite humbling,” says Saachi, who was invited by Narendra Modi to appear on his talk show ‘Chai Pe Charcha’ on Women’s Day in 2014, before he was elected prime minister.

Each fresh peak ascended teaches something, but actual learning occurs while you’re climbing up. Quoting Steve Harvey, Saachi says, “If you do not jump, your parachute will never open. You will be safe, but you won’t soar. So you gotta jump.”

In July last year, Saachi set out on a solo climb of Stok Kangri. “It was challenging but an enriching experience to say the least. The view from the top was a sight to behold. The peak offered a fantastic view of the Karakoram ranges and many other peaks. The descent was trickier and riskier than the ascent. There was a kind of small hump on the summit, a 35-40 degrees slope. I got on the ridge, and we had to descend carefully and slowly because one slip could either take us on a short cut ride to Leh or the glacier,” quips Saachi, adding, “On my way back, I saw a mountain that had a naturally shaped Buddha’s face on it. Not many people can see it. I felt blessed and privileged enough to spot it.”

It is sights like these that make mountaineering worthwhile for her. An avid photographer, Saachi has an impressive collection of pictures that she has clicked on her climbs. “A moment captured is a memory made for a lifetime,” she says.

She has also met many interesting people on her way, such as Col Prem Chand, also known as the Snow Tiger of India, who was the first Indian to climb Mt. Kanchenjunga in Himachal Pradesh in August last year. “His love for mountaineering is inspiring, and meeting him was pure bliss, something that I will cherish forever,” she fondly recalls.

She also can’t forget 50-year-old Tej Bahadur whom she met during her recent trip to Satopanth. “He had been a part of many difficult treks in the Himalayas in his heydays. He even lost two of his fingers while climbing Mt Kamet. But all that is behind him; today he is happy doing chores and helping other mountaineers by cooking, cleaning and running errands, and mind you without any complaints. He exudes contentment. His peaceful aura is infectious,” she says.

Saachi did her first-ever adventure mountaineering course under the mentorship of Brigadier MM Masur, former principal of Nehru Institute of Mountaineering. She is also actively associated with the IMF in Delhi.

Today, she follows a rigorous fitness regime, takes care of her diet and trains regularly. “I run, swim, and meditate to stay fit because mountaineering calls for a lot of endurance and strength,” she says. All this while doing her day job at Doordarshan, anchoring and producing shows! These days, she is busy doing the legwork for her soon-to-be aired show ‘Beyond Heights’ that will feature adventure sports films that have been shot in India by Indian filmmakers.

Saachi is also gearing up for the circumambulation of Mt Kanchenjunga in September and all set to summit Aconcagua, South America’s highest peak, in December-January. And if she is not summiting peaks or brainstorming for her TV shows, she is busy delivering motivational lectures at campuses and corporate houses.

She yearns for the good tidings of mountains, looks for peace in the company of nature, love in the hospitality of strangers, finds relief in a rigorous climb and takes immense pride in hoisting the tricolour atop the peaks she climbs. Saachi is surmounting all odds, one peak at a time.