As a teenager, Naina Redhu was intrigued by her father’s analog Fuji film camera that he would take on deployments as part of his job in the Indian Army. When it was available to her, she would take pictures of plants or dogs in the neighbourhood.

Her hobby continued all through her schooling from an Army school in Delhi, and followed her to Pune where she did her BCom and then MBA.

Along the way, she became one of India’s first few bloggers, using the online forum to publish the latest papers and case studies in design and innovation.

She also began putting up her amateur photos.

In 2006, when a friend set up a new website and needed an image bank, he reached out to her.

“His budget was low, but I decided to give it a shot,” she narrates.

“When I reached the client’s location, the client asked, ‘Where’s the team?’ I told him, ‘At this price, what do you expect?’” The young girl convinced them to have a look at her work, and pay her only if they were satisfied.

“They loved it, but I barely managed to cover costs,” she recalls of her initiation into professional photography. With the help of a friend from Australia, she procured a DSLR camera for half the price of what it cost in India, and went into business, starting with a friend’s wedding, and then commercials. 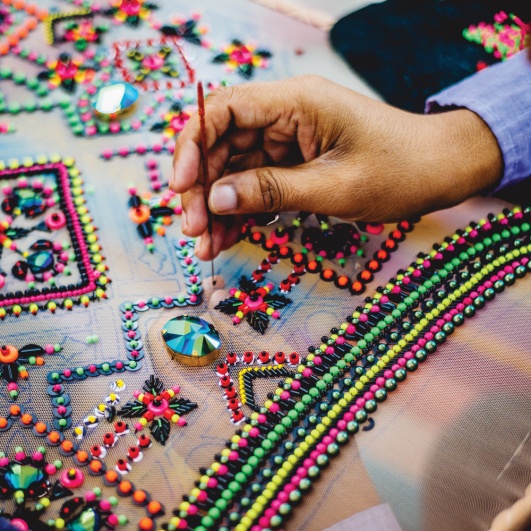 She chronicled her work on her blog along the way, growing in online influence and followers. Even today, in its new avatar, her blog Naina.co is one of the most respected luxury lifestyle blogs in the country.

Born in a military hospital in Mhow, Madhya Pradesh, and raised all over India, Naina was hardwired for versatility and resourcefulness from a young age. Describing herself as an ‘experience collector’, she covers a broad range of subjects from lifestyle and fashion to personal travel experiences.

She is also highly prolific, and published more than 1,000 posts in 2017 alone. “I prefer projects that result in a photo story, such as taking the readers through a garment-making process,” she says.

With over five lakh followers across social media, she has partnered with brands like Emirates, Google, Swarovski, Dior, Burberry and Hermes among many others.

Naina married her childhood friend about eight years ago, and now lives in Gurugram close to her parents. Her sister, Akanksha, is also a fashion blogger.

“It’s important to have fun along the way, and to ensure that the quality of your work is good,” says the 37-year-old of her success mantra. “And be open to learning – you never know who you meet and what they can teach you.”