When women entrepreneurs in India set out to launch a new business, they face a plethora of challenges – from family restrictions, unsafe environments, and lack of network, support and mentoring opportunities, to being surrounded by male dominance in the corporate world.

Recognising these challenges of entrepreneurship for women, banker Megha Agarwal, who had lived abroad most of her life, decided to rope in her sister, Delhi-based photographer Neha Agarwal, to launch a unique co-working space for women entrepreneurs and professionals, called uoQpi (pronounced ‘you occupy’) in Gurugram this year. It’s the first of its kind in Delhi-NCR.

“From a very young age, our mother, who started off as an entrepreneur whilst living overseas, has been our inspiration. She set an example for us and showed us that women can manage both their personal and professional lives. However, as we were growing up and becoming more aware of our surroundings and of the real world, we noticed that though a majority of the women were ambitious and career-oriented, but somewhere along the line, they were pulled back from pursuing their dreams and family responsibilities took precedence,” says Neha, 38, the elder of the duo.

The more the sisters read up about this, the more shocking facts they found. “Closing the gender gap globally in the workforce could add a staggering $28 trillion to the global economy. If women’s participation is equal to that of men in India, this would inject further $2.9 trillion to India’s GDP,” they noted.

Further, they found that between January and September 2019, only 5.2 percent of the $9.14 billion raised in overall funding by startups went to one with a female founder or co-founder.

These astonishing facts led to the inception of uoQpi, an avenue that is meant to provide women the space they need to re-energise, re-boot and re-connect with their own. “uoQpi is a combination of a physical space with a community filled with inspirational women in business, where collaborations and brainstorming ideas are born. Our vision is to become an incubator for women-led start ups by providing them with all the tools and resources that they need to excel,” says Megha, 34.

Located at Unitech Cyber Park, Gurugram, the centre offers all the comforts of a green, cheerful, soothing co-working space with great views, plus more. Women can bring their children along, and the space has been designed to host events and talks in future, from healthcare and beauty workshops to mental-health awareness events. The space also includes a makeup studio for makeup artists and video professionals to create video logs and tutorials.

By offering flexible packages starting from just Rs 1500 for five visits per month, the sisters have ensured that women in all kinds of fields can benefit from such an arrangement.

“We understand the power of collaboration. We wanted to create a physical space and a membership community for a nominal amount giving flexible options to allow women entrepreneurs to be innovative without any boundaries, make lifelong friends and have open and honest discussions with other women,” say the founders.

After seven months of hard work, the space was officially opened to women entrepreneurs last month. The sisters are upbeat about what the future holds: “The journey so far has been exciting and there is still a lot more that we need to do. We’re looking forward to expanding and creating more uoQpi business hubs to empower and increase the number of women in business.”

0 comments on “These Sisters Have Launched a Co-working Space Only for Women, the First in Delhi-NCR”

Umadevi Raje Jadhav has several achievements to her credit as economist and journalist, all of which become even more remarkable considering she is the descendant of an erstwhile royal family of Gujarat, and has a large royal estate to manage when she’s not on assignment. The former professor of economics grew up in palaces, but always had a practical head on her shoulders and a desire to prove her own worth. No wonder, today, even as she spends her time straddling three countries, she continues to consider herself an “IAS officer’s daughter”, valuing education and cultural responsibility over entitlement. Read the exclusive interview today on eShe.in #royalty #indianroyalty #gwalior #palace #umdavijadhav #queen #economist #eshe #eshemagazine #womenwhorule #hotels #luxuryhotel #Neemranagroup #neemrana #neemranahotels #luxuryproperties #india #royalindia  #madhyapradesh #readandinspire #empowerwomen
Samra Zafar was 16 when her parents arranged her marriage to a man 11 years older than her. Subsequently, she moved to Canada with him on the premise that she could fulfill her aspiration to attend University. It did not happen. Instead followed years of emotional and physical abuse by her increasingly possessive husband. She gave birth to two daughters and tried to fulfill all the expectations laid on her as a wife, as a daughter-in-law, but somewhere always fell short. Every single day, she was humiliated, assaulted, isolated, disrespected, and repeatedly told that she was not good enough. Yet, she refused to give up on life, and continued to follow her dreams of an education, even if it meant escaping her marriage and building her own new life. Today, she is the voice of change for millions of others. Read her interview today on eShe.in #eshe #eshemagazine #womensvoices #womenoftheworld #feminism #whyweneedfeminism #forcedmarriage #marriage #books #author #samrazafar #readandinspire #interview #freedom #education #penguinindia
In 2016, New York-based writer-journalist Yashica Dutt ‘came out’ on Facebook as a Dalit in response to Hyderabad PhD scholar Rohith Vemula’s suicide, which many have labelled an “institutional murder” after he protested against the casteist policies of Hyderabad University. In 2019, she wrote her memoir Coming Out as Dalit (Aleph Book Company) about growing up with the inhumane label of being low caste looming over her family. She talks to us about how the book came about, her thoughts on coming to terms with her Dalit identity, and the existence of caste discrimination in modern society. Read her interview on eShe.in #women #dalit #dalitidentity #comingoutadalit #caste #casteism #discrimination #eshe #eshemagazine #identity #rohithvemula #fightingdiscrimination #yashicadutt #womensvoices #believeher #empowerwomen #readandinspire
eShe magazine is the proud media partner for @ileapacademy's sundowner event at @truetrammtrunk in Mumbai on February 7th at 5 pm. This is what editor @aektakapoor has to say about it! #eventalert #ileapacademy #deepakhannarupani #womenhavingfun #Womensmagazine #eshemagazine #eshe #womenoftheworld #girlsnightout #girlsjustwannahavefun #party #invite #bombaygirls #mumbaievent #ItsYourTimeToShine
Without equal representation in government, are women citizens assured of gender-fair laws, equal rights, and social justice? Fact courtesy: Oxfam #Factoftheday #WhyWeNeedFeminism #eshe #eshemagazine #feministwire #feminist #female #thefutureisfemale #feminism #equality #equalworld #genderequality #genderparity #government #womeningovernment #thoughtfortheday #thoughtfortuesday #tuesdaymotivation
Painter and printmaker @RohiniDevasher’s work explores an interesting intersection of art and science. Ten years ago, the painter and printmaker collaborated on a project with amateur astronomers in Delhi. What began as joint investigations, stories and conversations culminated into a chronicle of this almost obsessive group of people whose lives have been transformed by the night sky. Another experience that pulled her closer to the enormity of nature and earth was spending 26 days on an oil tanker as part of a unique artist’s residency program called the Owners Cabin. Looking at the fragile and polarised world that we co-exist in at the moment, what does Rohini have to say about being an artist today? “Navigating an increasingly fractured world, and trying to make sense of it while inhabiting it with all the pressures that it entails, is never easy. What helps is your belief in your work and yourself, and the patience with which you carry it. But at this moment I am a citizen first and everything else second,” she avers. Read her full interview on eShe.in #eshe #eshemagazine #womenartists #art #artists #rohinidevasher #womensvoicse #womensart #womeninart #ocean #ownerscabin #astronomy #science #conflict #citizen #nocaa #nonrc #democracy #freedom #badasswomen #womenoftheworld 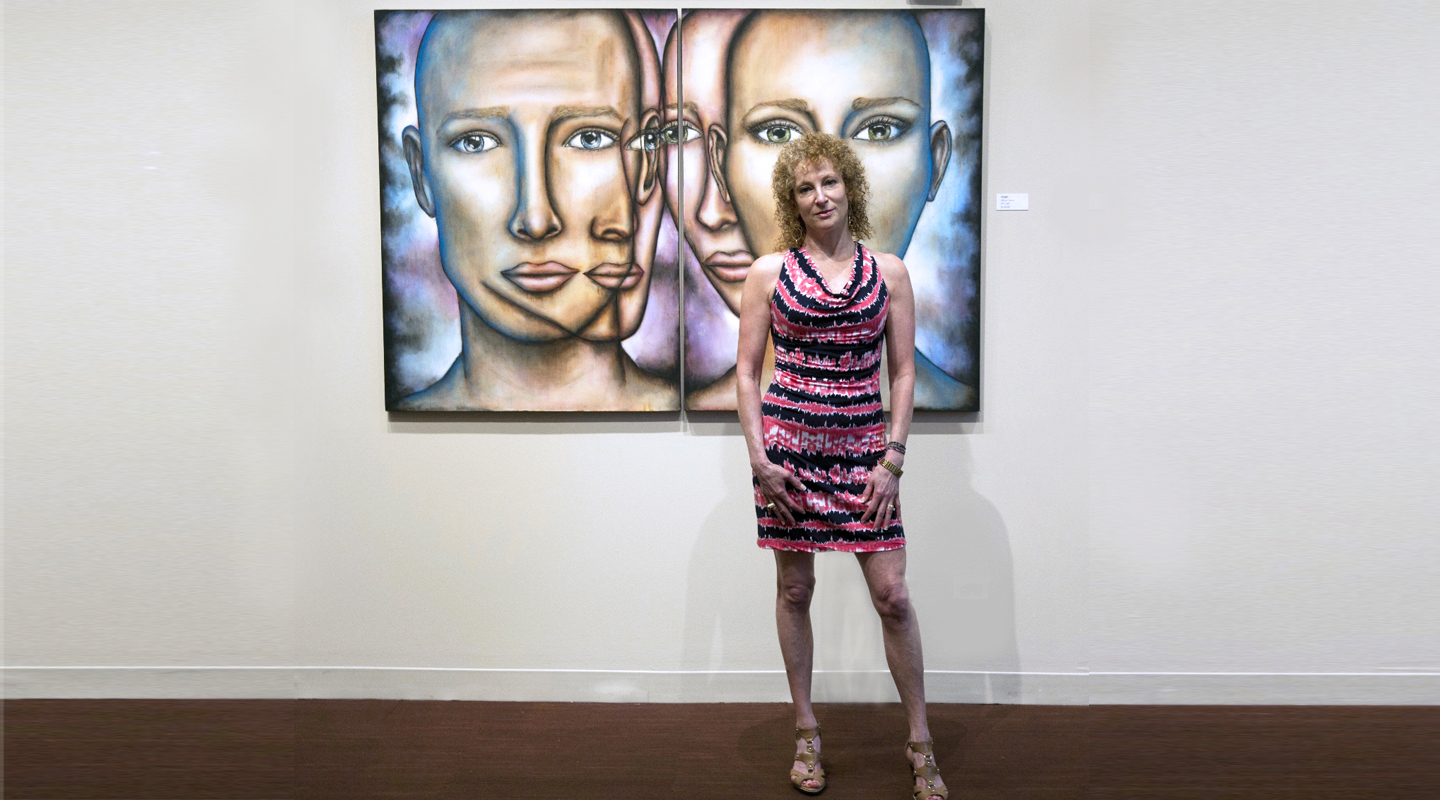